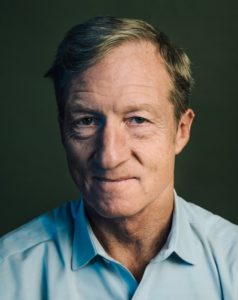 Tom Steyer was the biggest campaign donor in 2016, spending $86 million on progressive causes. So what does he do after losing? Fight harder. Wired Magazine March 23, 2017. Photo Credit: Michael Friberg.

It’s a fact that Solar Energy and Wind Energy Technologies produce electricity at a lower cost than burning fossil fuels, prompting the question, why isn’t the world moving faster toward converting to clean energy?  Wired Magazine’s March issue presents a thought provoking answer in an interview with Billionaire Tom Styer.

TOM STEYER ISN’T your average California tree hugger. The former hedge fund manager—number 1,121 on Forbes’ wealthiest people list, with $1.61 billion—was once best known for turning $15 million into $30 billion in about two decades.  But then he went hiking. Steyer and environmental activist and author Bill McKibben spent a day trudging through the Adirondacks. Not long after, Steyer parted ways with the leadership of his company and his oil and gas investments, began to fight the Keystone XL pipeline, and then reinvented himself as a one-man superfund for climate causes (Stockton, 2017).

The new company, NextGen Climate, has invested $170 million in the last four years advocating for policies and politicians that help the environment and advance renewable energy.  Styer is aware that the issue is not one of science, because the data is inarguable.  He believes that the reason for the slow pace of change is one of politics.  He makes a pretty convincing case in a recent interview:

Wired Magazine:  Solar and wind energy costs have been coming down for decades. Why aren’t they replacing fossil fuels faster?

Styer:  There are a lot of subsidies for oil and gas, things like tax breaks and access to markets. That’s partly because there’s a lot of volatility in the oil and gas markets. Fossil fuels are raw materials that have to be extracted and processed. Wind and solar energy are different. The only costs associated with them are technological. WIRED readers should be familiar with the idea that technology gets better and cheaper every year. That’s not true about fossil fuels. The techniques we use to withdraw them might get better every year, but the price has actually risen over time. If you take away subsidies from fossil fuels, wind and solar are actually cheaper (ibid).

Developing countries in Africa, including the Democratic Republic of the Congo (DRC) are not hindered by the politics of money in the way most Carbon producing nations are beholden to the campaign contributions from Coal and Oil companies.  They have a chance to get it right the first time.  Help us help them by sharing this post!

This site uses Akismet to reduce spam. Learn how your comment data is processed.